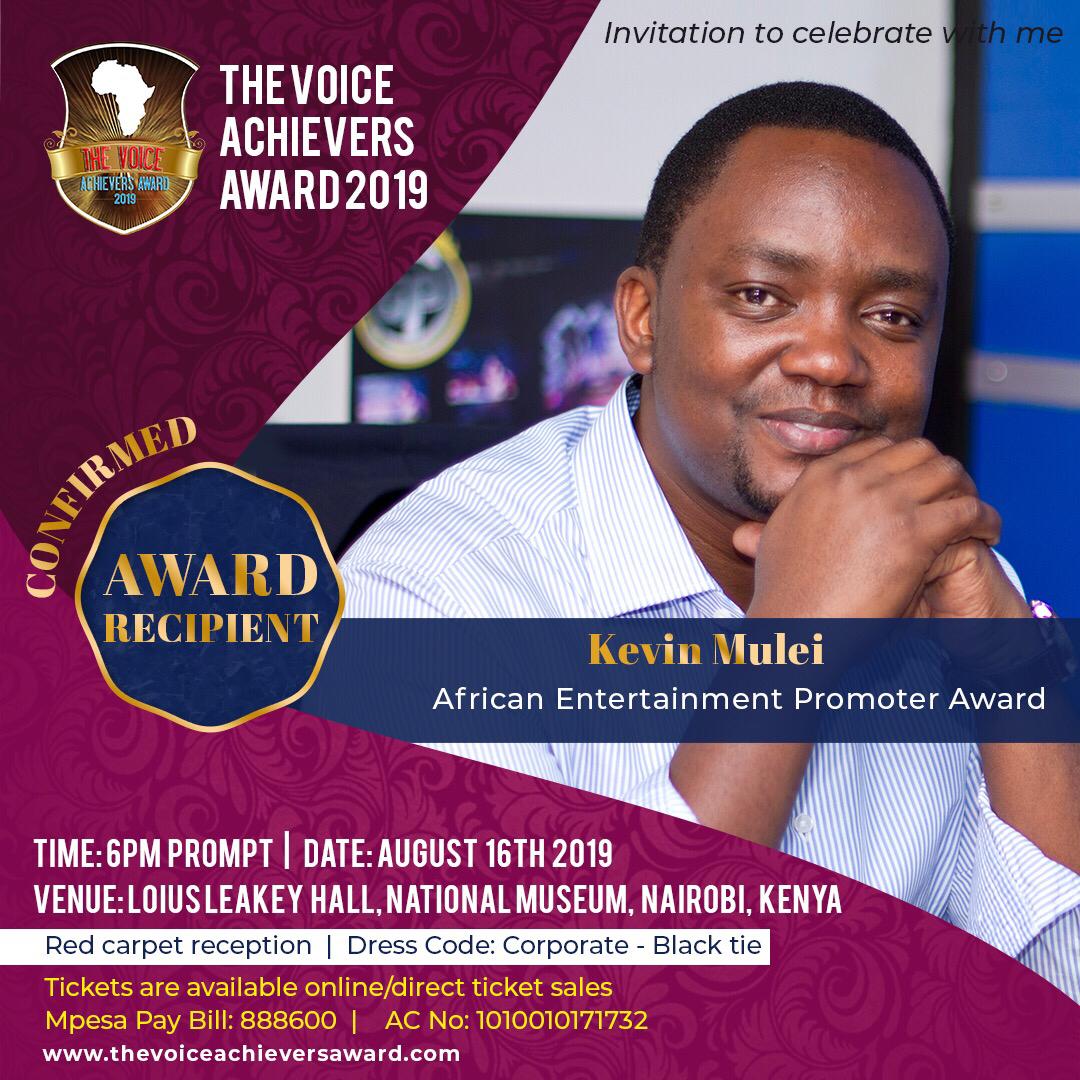 Kevin Mulei will this Friday join a list of prominent African Leaders, Presidents and Ambassadors who have won an Achievers Award after a confirmation that he is the 2019 recipient of the prestigious Award- The African Entertainment Promoter for the year 2019!

Kevin who has passion in empowering and preparing the younger generation across Africa for future opportunities is an exemplary Pan African Entrepreneur and Philanthropist revolutionizing the Media & Entertainment industry in Kenya and Africa at Large. A former DJ, Kevin has been running the most prestigious Gospel Awards Ceremony in Africa-Groove Awards for 14 years. He also runs NRG Radio, Choice Radio, FunX, Film Studios and MoSound Events the leading brand experiential company in the region amongst other companies

The Awards which have never been held in Africa, will for the first time on an African soil be held in Nairobi, Kenya this Friday- 16th August 2019. The Voice Achievers Awards began Eight (8) years ago. It is an annual recognition Award for outstanding men and women who have made substantial contribution towards the advancement of Africa and its people.

The awardees are outstanding men and women who in pursuit of their business and services to humanity, have distinguished themselves in various fields of human endeavor across Africa.

Kevin who is known for his wealth of Wisdom, Humility and Disruptive-Over the top ideas will also be joining the list of inducted HALL OF FAME of the Voice Achievers Award 2019.

Kevin Mulei is an exemplary Pan African Entrepreneur and Philanthropist revolutionizing the Media & Entertainment industry in Kenya and Africa at Large.

As the young man who has built entertainment power houses, Kevin is known for his wealth of Wisdom, Humility and Disruptive-over the top ideas.

His empire started in a small house store in 2004, where his passion for music would see him raise platforms to celebrate gospel artists and power small events before exploding into a behemoth over the years that include Media Houses, Events Production, Experiential Marketing, Film Business, Production Studios, Digital Agency, Events Agencies, Creative Hub, State of the art Technical Rental Equipment for film, advertising & events production, and a Gospel Music Platforms.

From a small store – small events company – MoSound Group (MSG) now competes globally and has won accolades for managing some of the largest most iconic events in the region including the Safaricom International Jazz Festival, the Global Entrepreneurship Summit headlined by former US President Obama amongst others. NRG Radio which is one of MSGs Sister Companies has also been lauded around the world for being the first Audio Visual radio station in Africa shaping the future of media consumption and Digital Entertainment.

While the start up season came with challenges that would have forced him to fold up, Kev’s attitude of fail fast powered him through the tough seasons. MSG now holds over 12 companies across Kenya, Rwanda, Tanzania and has plans to diversify to 20 more African countries.

The 37-year-old who is a graduate of Stanford Seed – a Stanford University Business leaders program and Strathmore Business School attributes his success to his Faith, an Innovative & highly Creative Team and a Win Big Fast attitude across his businesses. On a normal day, you will spot him along the corridors of his offices in plain grey or white t-shirts and blue jeans trading ideas with creatives. He is currently focused on empowering and preparing the younger generation across Africa for future opportunities.

Kevin is married and is blessed with 3 beautiful children.